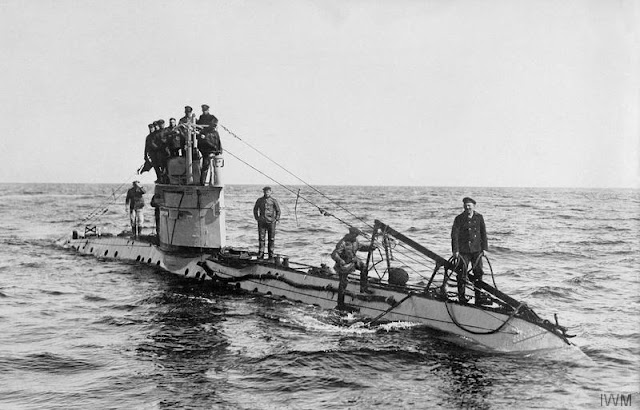 The crew of a German UC-1 minelaying submarine - a never-ending threat
to shipping traffic, especially those vessels carrying troops to Europe.
[Courtesy of Imperial War Museum]

We did not expect to have such a long trip but owing to Subs having been sighted we had to change our route and go up near Greece then zigzag down to off the coast of N. Africa and up again past Corsica and other Islands.

[Will Sparkes' diary entry under the 31st May runs into a couple of
days - for clarity, it has been divided up over the coming entries]

Sunday 4th June
Lay in till 7.30. Breakfast at 8.30. Church Parade at 11. No band allowed. Our route is well patrolled, quite a number of destroyers and other Naval craft, also trawlers being met with along the route. Passed to the north of Crete and expect to clear the Western end of the island about 11 o’clock tonight. We then are to head south of Malta. Informed by wireless that one submarine had been heard of on our route. "Caledonian" now running with us under Destroyer escort.