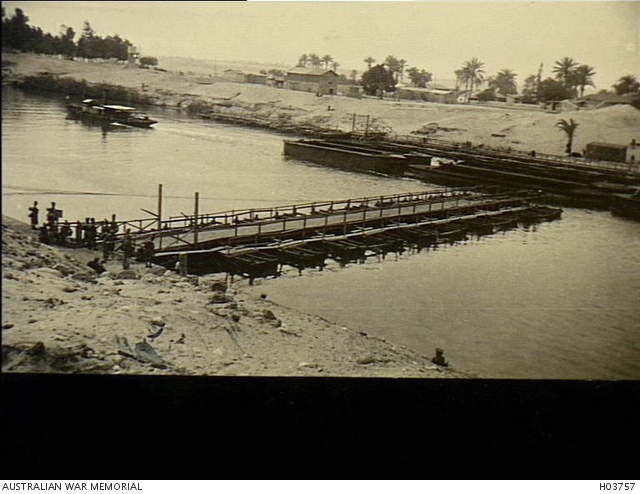 Very busy on ordnance work at Serapium. Equiping a Brigade is no easy matter.  Will never forget harness and other items. Captn Tuckett paid me the compliment before General Rosenthal of being the only Brigade QM in the Artillery

At last the day of our departure from Serapium had arrived. For the past few days it was all running about for this great Finale. I was feeling a bit fagged over the work. Our train left at 8.30 PM and it did not take long to get the horses & gear aboard. I was very glad of when the shriek of the whistle gave us warning that we were off & Once more we were on the move. I do not think one of us was sorry to leave the Desert behind and face towards Alexandria. It was an all night trip and one after another our chaps dropped off to sleep on the seats. Fortunately I was in a 2nd class carriage and it was not so bad but the lads in the 3rd class carriage must have had a very hard bed. There is one thing I can never forgive our Military Authorities over and that is making  all ranks lower than a Sergeant travel 3rd class. Going to Town you would have to put up with some dirty Egyptian Waller rubbing up against you on the seat. You had no option of your company. The least that could be done would be to let those who desired travel 2nd class if they wished to pay the difference. The 1st class was reserved for officers & civilians who could pay the fare.

At the different stations enroute to Alex the noise of the Wallers you were rudely awakened by the awful noise of the wallers selling cakes or such articles. It will be a long time before one loses the forgets the persistancy and cheek of the Egyptian Street Seller. We arrived at What shameful bargainers they are and remind one of the  Chinamen who generally ask double treble the value expecting to receive

[Will Sparkes' diary entry under the 31st May runs into a couple of
days - for clarity, it has been divided up over the coming entries]

Brigade entrained at Serapeum West and proceeded to Alexandria.

Made sundry purchases during the morning, obtained continuation pay book from Pay office. During afternoon went out to see the Zoological Gardens. Took Mrs. and Miss Christian also Mrs. King. They showed me round. Returned to Serapeum by 6.15 PM train. The 11th Brigade took its departure. All arrangements worked smoothly.