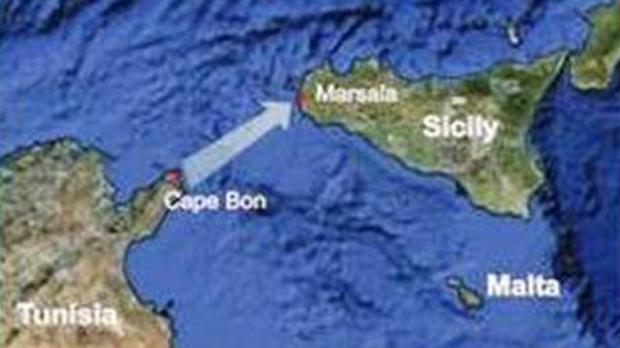 The journey passed Malta to Cape Bon in Tunisia, described by Gen. Rosenthal (below).
[Courtesy of Times of Malta]

It took us days before we came in sight of Marseillaise. A most enjoyable trip in every way - calm cool and without much excitement. I should think the Meditteranean was never in a better mood or its waters were never a deeper blue. As I sat on deck late on an afternoon and looked out through that pale opalescence of soft light there seemed Peace and Beauty on every side. One would never dream that the fearful war tragedy was rendering the world. I managed to read several books on the trip - almost the first I have had time to finish for the last 18 months.

No accident or unusual occurrence marred the trip and there did not appear to be that same restriction placed on the men as on other Transports I have travelled on. It speaks highly for Col F. A. Hughes who was the O.C in charge.

I met young Craig of our Dress Dept on board. He was with a small detachment of the 15th Battln. Lieut Butcher who knows Willy McKeon was also on board.


[Will Sparkes' diary entry under the 31st May runs into a couple of
days - for clarity, it has been divided up over the coming entries]

Passed to the southward of Malta about breakfast time. Now making towards the coast of Africa beyond the Island of Pantellaria, thence northwards to Marseilles.

No further news of Naval Battle. Allies have taken over Customs, Telegraph Offices and Police duties at Salonika. Martial law has been proclaimed. African coast (Cape Bon) showed up at sunset.