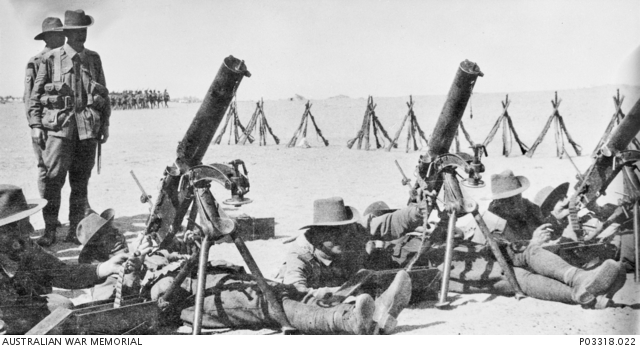 The 1st Machine Gun Brigade firing rounds during a practise drill at Serapeum - these
Maxim heavy machine guns have been mounted on Vickers tripods, which have been
reversed to enable the weapon to be elevated for anti-aircraft use.
[Courtesy of Australian War Memorial - P03318.022]

Called on General Cox with an officer from 60 pr. Battery, discussed and decided on position. Inspected Anti Air Craft Howitzer and detachment. B.A. column busy on getting ammunition to Front Line , & DAC has now taken over all ammunition from Ordnance. Both units will get a chance to learn something of ammunition supply in the field. Officers from INVERNESSHIRE R.H.A. Battery called. This Battery is doing duty at the Front Line and comes under my orders.