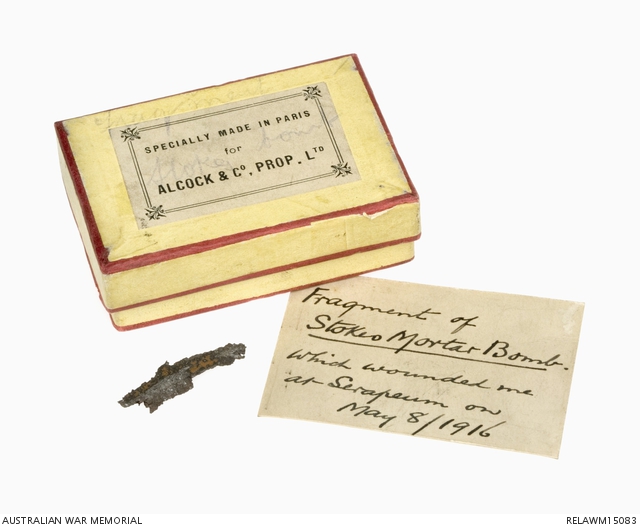 A Stokes Mortar fragment sent home to Australia by Brigadier John Monash, with
an accompanying note, "Fragment of Stokes Mortar Bomb which wounded me at
Serapeum on May 8/1916" - Monash, in charge of the Suez Canal Zone defences,
was accidentally wounded by a piece of shrapnel from an Australian Stokes Mortar
grenade on the 8th May 1916, likely as part of the exhibition shoot attended by
Gen. Rosenthal (below). The wound appears to have been slight and did not
require hospitalisation, as there is no mention of the incident in his service record.
[Courtesy of Australian War Memorial - RELAWM15083]

The 10th Brigade commenced its shoot to day at 6.30 instead of 6 AM as instructed. Targets were too far off and too indistinct for an instructional shoot, consequently full value was not received for the amount of ammunition expended. Col. Bernard (G.S.O.I ) came out to see the shoot, the General not being well. Came over Canal to witness an exhibition shoot from STOKES Trench Mortars. Detachments had not arrived from Ismailia, consequently shoot had to be postponed to 5 PM when a number of officers attended. The demonstration was most interesting and the mortar should prove most effective up in the line with Infantry.