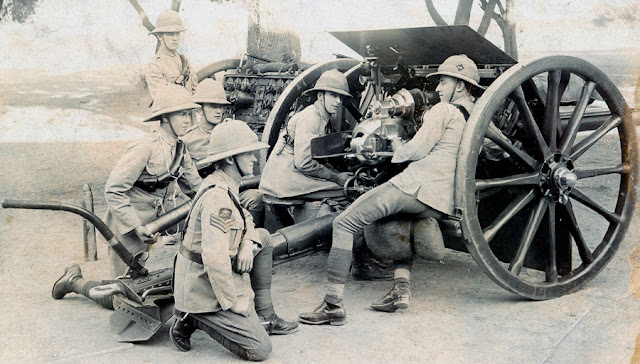 A British R.F.A. Gun Crew, similar to that of the 4th East Anglian Brigade
mentioned by Gen. Rosenthal below - the next day, the 4th East Anglian
Brigade would be redesignated as the 173rd Brigade R.F.A., coinciding with
their move to Serapeum.
[Courtesy of Invisionzone]

Slept in for a change. No shooting. Also evaded Church Parade. Getting packing done prior to departure. Officers of the 4th East Anglian R.F.A. Brigade called on me. This Brigade is to take over our work in this Sector. Lord Exeter commands. All stayed to lunch, inspected camp site and returned to their position. Received orders for 1st Flight. The 11th Brigade first to move. Capt. Forrest left with Advance Party.