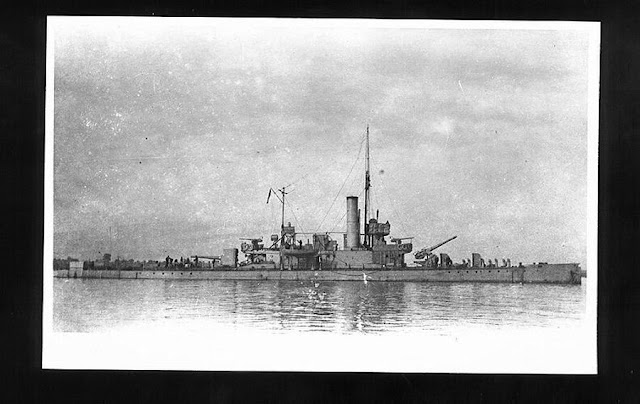 The H.M.S. Aphis, which arrived off Serapeum in the Suez Canal to fix
observing stations for the artillery shoot (below).
[Courtesy of Naval History Homepage]

Commander Noble and his officers called to see me at 12 o’clock and I went off to lunch with them at 1 PM. The monitors were the "SCARAB" and "APHIS". Being again a terribly hot day I stayed on board and went with him down to his Station in the BITTER LAKE returning to my HQrs. at 7.30 PM. It seemed no cooler on the water than on the land, the wind was scorching, but on the boat they had plenty of ice, so we filled up with iced lime juice and soda, and really delicious it was. They keep a couple of chameleons on board as fly catchers.

Feel very seedy. I think I got a touch of the sun this morning. Received two letters from Nell and one from Chris.