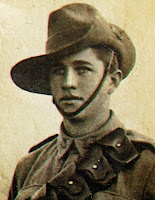 I am on horse piquet again get plenty of it.  We draw coffee or tea of nights for a refresher at midnight when on guard or piquet.  Only had one horse down this time.  We must be getting near Ceylon now.  There is a storm on tonight.  It is blowing some too and is a bit cooler down in the stables when it is windy.  We have wind screens and scoops up to catch any little bit of wind we can. 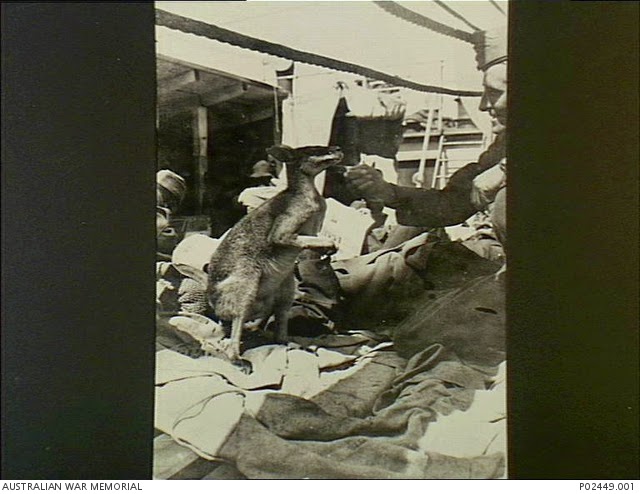 Life onboard the A22 Rangatira also involved caring for the 7th Battery's
mascot - a spritely, adventurous wallaby mentioned in Billy's diary entry
on the 29th September 1914.  The above photo was taken in November
1914, whilst enroute to the Middle East.
[Courtesy of Australian War Memorial - P02449.001]

Almost out of sight of Australian Convoy at dawn. Have not gained much on them. The "Waimana" dropped a horse overboard this morning making their total 7. Balance of men inoculated today. About 30 refused and were placed under arrest for disobedience of orders. At 5PM I had them all paraded, told them of the advantage of inoculation and then ordered them to go to the Hospital for treatment. All but one refused. I therefore called a guard of 40 men, and ordered two men to compulsorily take the first man in. When they found I was determined to be obeyed they "caved in".  However I kept the guard standing by till all had been done, then I dismissed the Guard and gave the culprits a good talking to.

Have had all the officers tonight on "Sketching". I am afraid some that were handed in were very primitive.

Horses making a big noise just before feeding tonight, and many were neighing. Mr Faulkner, second officer, referred to it as "shouting". The Captain was today watching horses exercising on deck and one animal on nearing an iron bollard put one leg on one side and another leg on the other side.

"Look" said he "that horse has got his after starboard leg on this side of the bollard and his after port leg on the other side." Everybody roared with laughter. Rifle practice today.

Wrote post-cards to Father & Mother, Alvord and Chris ready for posting tomorrow. We are now nearing Colombo. Expect to reach there about 8.30AM tomorrow. I then am ordered ashore to make arrangements at transport Office, Saddlers and Chemist Shops for Australian Convoy’s requirements. Expect to have about 3 hours ashore.