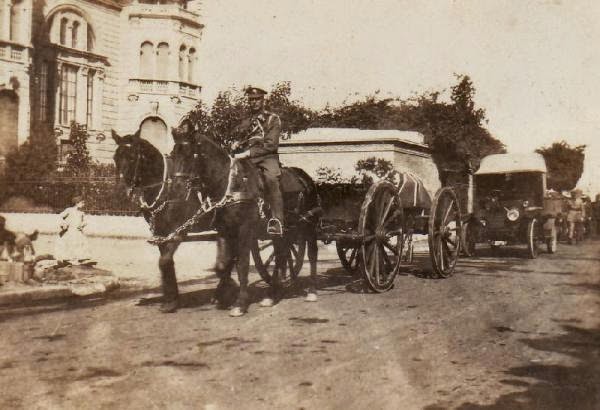 This morning the Brigade (less 8th Battery) crossed over Pontoon bridge, Major Browne and myself completed arrangements for Major Parker’s funeral. The Adjutant selected firing party of 200 rank and file and during the morning instructed them.

Funeral moved off from Mena House Hospital at 2.30PM; the 8th Battery providing gun carriage and team. Major Brown, Burgess, Hughes, Nicholson, Mills and myself acted as Pall Bearers. The grave is in the Old Cairo Military Cemetery among soldiers, many from our Division.

Major Parker’s death has cast quite a gloom over our Brigade. His is the first loss we have so far suffered out of over 700 officers and men.

Lecture tonight by Col Hobbs regarding Tactical schemes. He paid a tribute to the late Major Parker. 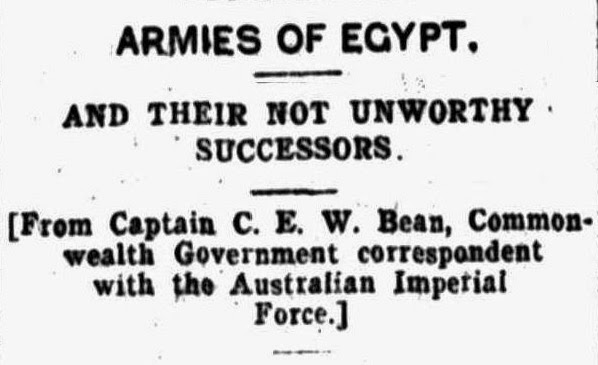 It is a brave ceremony - the soldier's burial. None of the heavy morbidity of the hearse, and mutes, and plumes; just the gun carriage and the flag and the blue sky, and many good comrades to carry him to his rest. I was present this week at the funeral of one of the most popular and competent officers in the force, Major Francis Maitland Wyborn Parker, D.S.O., of the 8th (or Western Australian) battery of field artillery. He was a son of Sir Henry Parker, formerly Chief Justice of Western Australia, and had served all through the South African war. He even got back again there from Australia when his first term of service was ended. He had done some dangerous scouting on the special order of Colonel de Lisle, and was doing well, bringing his patrol back across a certain river rapids at the cost of only one broken arm. When the present war broke out he was not in the forces; but when every officer and man in his old battery - the 37th - volunteered, he volunteered with them, and came as second in command to that officer who was his own junior in South Africa - Major Bessell Browne, D.S.O. Two of his brothers came also with the artillery. And it was his friends of the old battery, and of the South African War, and of his own state that followed him to his grave. And one stood there and saw them bare-headed about his grave - friends who had come from every camp around Cairo - Colonel Antill, Major Bennett, D.S.O., Colonel M'Lynn, Colonel Pope, Colonel White, Colonel Monash, Colonel Hughes, Colonel Hobbs, and a score of others, with the great figures of the men of his own battery and other batteries lining the path in the background. When the three last volleys rattled out and the long last query that ends the last post gradually floated out into the silence, and they turned to leave him there, with a cool breeze stirring gently in the dark cypress trees, and in the open the kites always wheeling ever so high overhead - one could not help thinking that whenever it came to be one's own turn his mother could wish him no worthier burial than that which falls to the lot of these Australian soldiers who rest in the little British cemetery in Cairo.


Taken from an article published in the Rockhampton Morning Bulletin on the
15th April 1915, penned by the Official War Correspondent Capt. C.E.W. Bean.
[Courtesy of National Library of Australia - Trove]