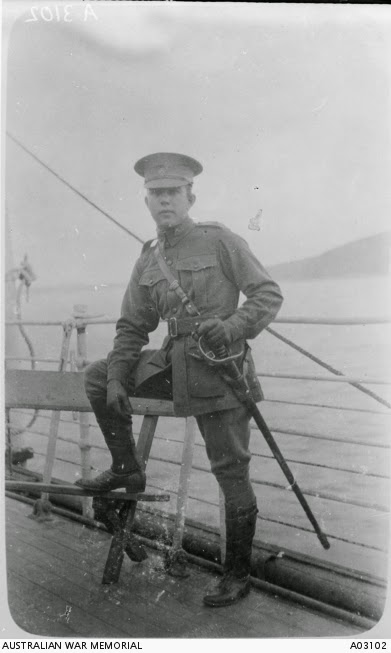 Lieutenant Claude Erle Jenkinson, who'd caused drama for Col. Rosenthal on
departure from Port Melbourne, & again at Mena Camp.  Jenkinson officially
resigned his Commission with the 3rd Field Artillery on the 4th January 1915,
& re-enlisted 48 hours later back into the A.I.F. as a Private attached to the
2nd Light Horse Regiment.  One year later on the 2nd January 1916, post-Gallipoli,
he sought discharge from the Light Horse to receive yet another Commission with
the British Royal Field Artillery.
[Courtesy of Australian War Memorial - A03102]


Head Quarters at work on Telephone Construction. Several men are expert electricians so we should have no trouble in maintaining our phones in a high state of efficiency. With Capt Waite paraded Mr Jenkinson before Col Hobbs. I had to report against him. Col Hobbs asked him if he was prepared to resign, and he agreed. The matter is now going before General Bridges. He has proved totally unfitted for his job. A good deal of trouble with B.A.C. defaulters. They seem to have a bad lot among them. Have now to arm the guard. Lecture tonight by Major Hughes on "Battery Tactics". Plenty of discussion afterwards.