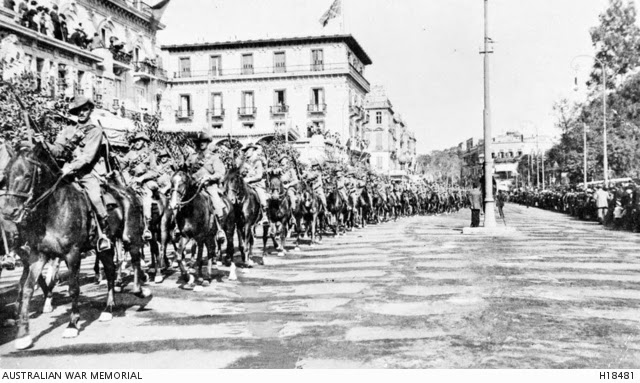 Australian Light Horsemen in a procession through Cairo, in
honour of the accession of the Sultan of Egypt, 20th December 1914.
[Courtesy of Australian War Memorial - H18481]

Checking over all vehicles this morning. Found correct. Church parades all over the camp from 9.30 to 10.30 this morning. Our C of E service conducted by Dean Talbot. Band from Infantry very "sick" indeed. This afternoon had large party of specialists out doing patrol work and doing helio work in addition. Very useful afternoon. Spent evening in writing home letters. Beautiful sight this morning from our church parade ground. The tents of various kinds, horses, vehicles, moving bodies of troops, sand hills, Pyramids, Palm trees and cultivation were all visible in one panorama. Hope to be able to secure a photograph showing everything. Colonel Hobbs wife and daughter have arrived at Cairo, also Major Parker’s wife. Mr Rogers wife who is a nurse at Mena House completes the party of W.A. wives. Mrs Christian is also at Cairo. I wish I could afford to bring my family here. No such luck. British protectorate established in Egypt. Special function in Cairo at which some of our Australian troops were present officially.